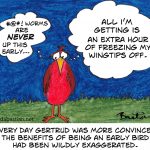 
Exaggeration and hopes or fears can lead to unrealistic expectations about treatment effects. 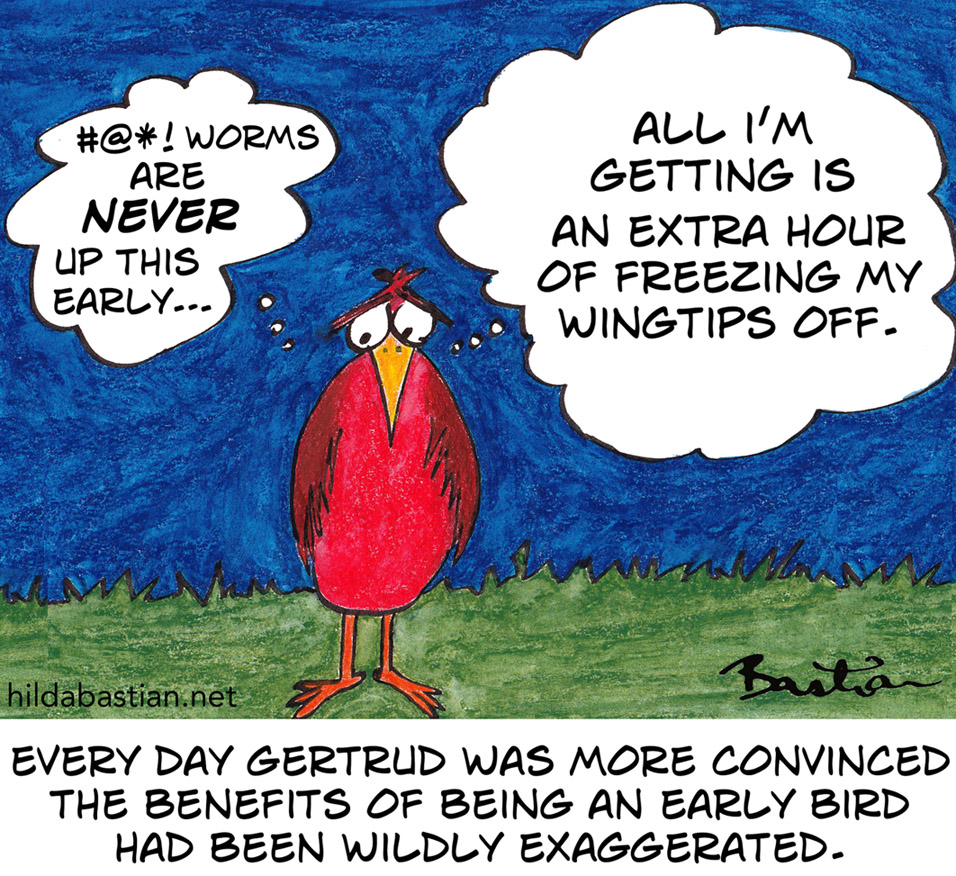 Believing in the value and virtue of being an early bird has deep roots in our cultural consciousness. It goes back at least as far as ancient Athens. Aristotle’s treatise on household economics said that early rising was both virtuous and beneficial: “It is likewise well to rise before daybreak; for this contributes to health, wealth and wisdom.”

But just as Gertrud came to suspect the benefits for her of being early weren’t all they were cracked up to be, earliness isn’t always better in other areas either. The “get in early!” assumption has an in-built tendency to lead us astray when it comes to detection of diseases and conditions. And even most physicians – just the people we often rely onto inform us – don’t understand enough about the pitfalls that lead us to jump to conclusions about early detection too, well…early.

Pitfall number 1: Those who need it least get the most early detection

This one is a double-edged sword. Firstly, whether it’s a screening program or research studying early detection, there tends to be a “worried well” or “healthy volunteer” effect (selection bias). It’s easy to have higher than average rates of good health outcomes in people who are at low risk of bad ones anyway. This can lead to inflated perceptions of how much benefit is possible.

The other problem is an over-supply of fatalism among many people who may be able to materially benefit from early detection. Constant bombardment about all the things they could possibly be worrying about might even make it more likely that they shut out vital information – which could make it even more likely that they ignore symptoms, for example.

Pitfall number 2: Over-diagnosis from detecting people who would never have become ill from the condition detected

This one is called length bias. For many conditions, like cancers, there are dangerous ones that develop too quickly for a screening program to catch them. Early detection is actually better at detecting ones that may never threaten their health. More people die with cancer, than of it.

So early detection means many people are fighting heroic battles that were never necessary. And some will actually be harmed by parts of some screening processes that carry serious risks of their own (like colonoscopies), or adverse effects of the treatments they got which they didn’t need.

Add to those the number of people who are diagnosed as being “at risk” of conditions they will never have or which would have resolved without treatment, and the number harmed is depressingly huge.

This massive swelling of the numbers of people who have survived phantoms is spreading the shadow of angst ever wider (a subject I’ve written about in relation to cancer atScientific American). Spend 10 minutes or so listening to Iona Heath on this subject –starting just past 2 minutes on this video. [And read @Deevybee’s important comment and links about developmental conditions in early childhood below.]

This is lead-time bias. And it’s why you should always be careful when you see survival rates in connection with early detection and treatment. Screening programs, by definition, are for people who have no symptoms (pre-clinical). So they cut the part of your life where you don’t know you have the disease short. Even if the earlier diagnosis made no difference to the length of your life, the amount of time you lived with knowledge of the disease (disease “survival”) is longer.

What we want is to move the needle on length and/or quality of life. For that to happen, there has to be safe and effective treatment, safe and effective screening procedures, and more people found at a time they can be helped than would have come from diagnosing the condition when there symptoms.

Here’s an example. This person’s disease began when they were 40 years old. They lived without any problem from it until 76 years old – then they died when they were 80. Their disease survival was less than 5 years. The proportion of their life that they “had” the disease was short.

Now here’s the same person, with early detection that made no difference to when they died – but the needle on how long they have “had” the disease has shifted. So they now survive longer than 5 years with the disease. The “lead time” has changed, but survival in the way we mean it hasn’t changed at all.

Randomized trials are needed to establish that in fact early detection and intervention programs do more good than harm – some do, some don’t. 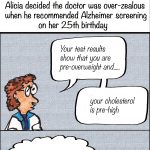 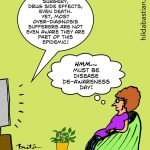